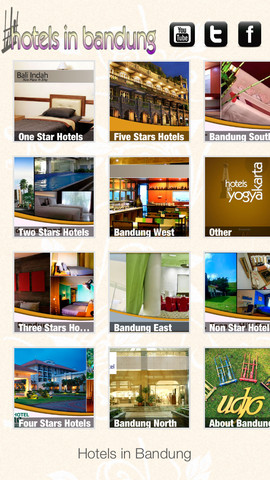 Bandung is the capital of West Java province; the Indonesia’s third largest city, and 3rd largest metropolitan city in Indonesia after Surabaya. Bandung has relatively year-around cooler temperature than most other Indonesian cities. The city lies on a river basin and surrounded by volcanic mountains, then the land is morphologically like a giant bowl.

There are tons of interesting destination in Bandung, related with historical time line that happened in this heroic city. Hence, there must be some places that worth to be explored. Beside, the culture, the atmosphere, the people and the way of living become Bandung is special. Moreover, Bandung has number of popular weekend-break destination for people living in Jakarta. The cooler climate of highland plantation area, the varieties of food, the cheaper fashion shops located in factory outlets, distros and golf courses.

By those recreational reason, make Bandung has numbers of good accommodation in every corner of the city. Those hotels, motels and guest houses will completely gathered in this Hotels In Bandung Application.

This is a FREE application, and you can get from your iPad and iPhone. Download now to make sure you have a deal with your ideal stay before you get your pack to Bandung.

Have a flourish vacation on Bandung….